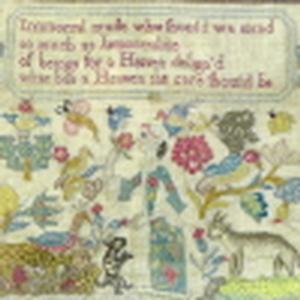 The spectacular sale of a Georgian Sampler

Consigned for sale by a local family along with various other items of furniture, pictures, and collectables, this sampler was identified as an interesting early piece of needlework, but was unknowingly heading for an incredible sale result.

Whilst Victorian and Edwardian samplers come through our sale rooms often enough and do tend to sell well to a keen following of collectors and specialist dealers, earlier works are much rarer and ones in good condition even rarer still. Catalogued as 17th or 18th century it has since been suggested as dating more precisely to circa 1750 or 1760.

Depicting a lady in a blue dress smelling a flower she might have recently picked, and surrounded by insects, birds and animals, including a dove holding an olive branch, a dog and a goat. A reserve to the centre displayed four lines of text, 'Immortal made what should we mind so much as Immortalitie of beings for a Heaven delign'd what but a Heaven the care should be', below three large stylised flowers, and all bordered by a frieze of red crosses and blue overlapping square motifs.

It featured a particular style of needlework called stumpwork to create grass and foliage, and also included an intriguing crowned thistle emblem to her left, possibly suggesting a Royal Scottish connection. The work itself measured only 31 by 25cm, and it was behind glass and had been relatively recently re-framed.

Four telephone lines had been booked for the lot and pre-sale interest via the-saleroom.com had already bid the lot to £1,450 before the start of the sale, hinting at something special to come. Over four minutes of bidding mainly between two of the telephone lines and one particularly fervent internet bidder settled ultimately to a decisive bid on the internet of £9,500!

If you have an early sampler to sell, or to consign other Georgian antiques for one of our upcoming auctions

please call us on 01780 766466 or by emailing valuations@batemans.com and have a look at our SELLING page.